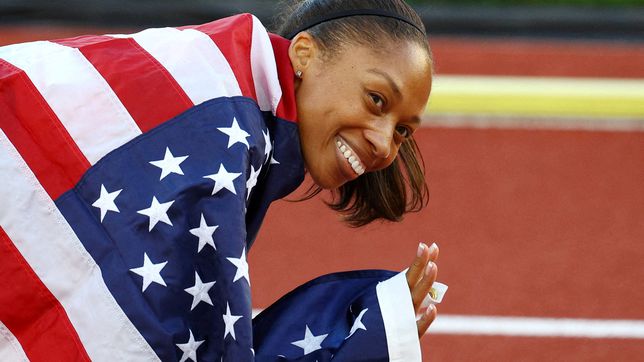 Which American athletes are participating today, July 16, in the Oregon22 World Championships in Athletics?

The first medals of 2022 World Athletics Championships in oregon were rewarded on Friday, in the 20km walk and the 4x400m mixed relay, in which The United States stood out with a bronze medal behind the winners the Dominican Republic and the silver medalists the Netherlands. The second day of the championships, postponed from last year due to the coronavirus pandemic and the subsequent move of the Tokyo Olympics from 2020 to 2021, offers medals in the hammer, 10,000m, shot put, long jump and men’s 100m. Here we take a look at selection of American athletes in action on Saturday July 16th.

In triple jump Yulimar Rojas is the woman to beatthe reigning Venezuelan two-time world champion and Olympic gold medalist having already extended her personal best this season to 15.74 to add seven centimeters to her own world record. For the United States, Tori Franklin, Jasmine Moore and Keturah Orjiwho is ranked seventh in the world and has a PB of 14.92, will be in action.

The 3,000m steeplechase heats start in the morning with Courtney Frerichs poses biggest challenge to favorite Norah Jeruto of Kazakhstan. Frerichs has a PB of 8.57.77, a shade better than Jeruto’s season-best 8.57.97 and could lead the Kazakh close. Another runner to watch is Emma Coburnwho has a PB of 9.02.35 but has yet to reach that goal this season, in which his best time was 9.10.63.

Cunningham and Allen spice up the 110m hurdles

The 100m heats up on Saturday

There are three evening finals, with all eyes on the men’s 100m. World leader Fred Kerleywho clocked 9.76 in Eugene just under a month ago to become the sixth fastest man in history, Trayvon Bromell, Christian Coleman and Marvin Bracy are all in the semiswith Marcell Jacobs – who propelled Kerley to the line at the Olympic Games – Oblique Sevilla, Olympic bronze medalist Andre De Grasse and Jamaican veteran Yohan Blake.

In the women’s 100m heats, Shelly-Ann Fraser-Pryce, Shericka Jackson and Elaine Thompson-Herah to spearhead Jamaican bid for sprint dominance against the challenge of Dina Asher-Smith, Marie-Josée Ta Lou and Mujinga Kambundji with Twanisha Terry and USA National Champion Aleia Hobbs in action for the host country after Sha’Carri Richardson failed to qualify.

10 things to know about Jason Robertson, including other athletes in the Robertson family