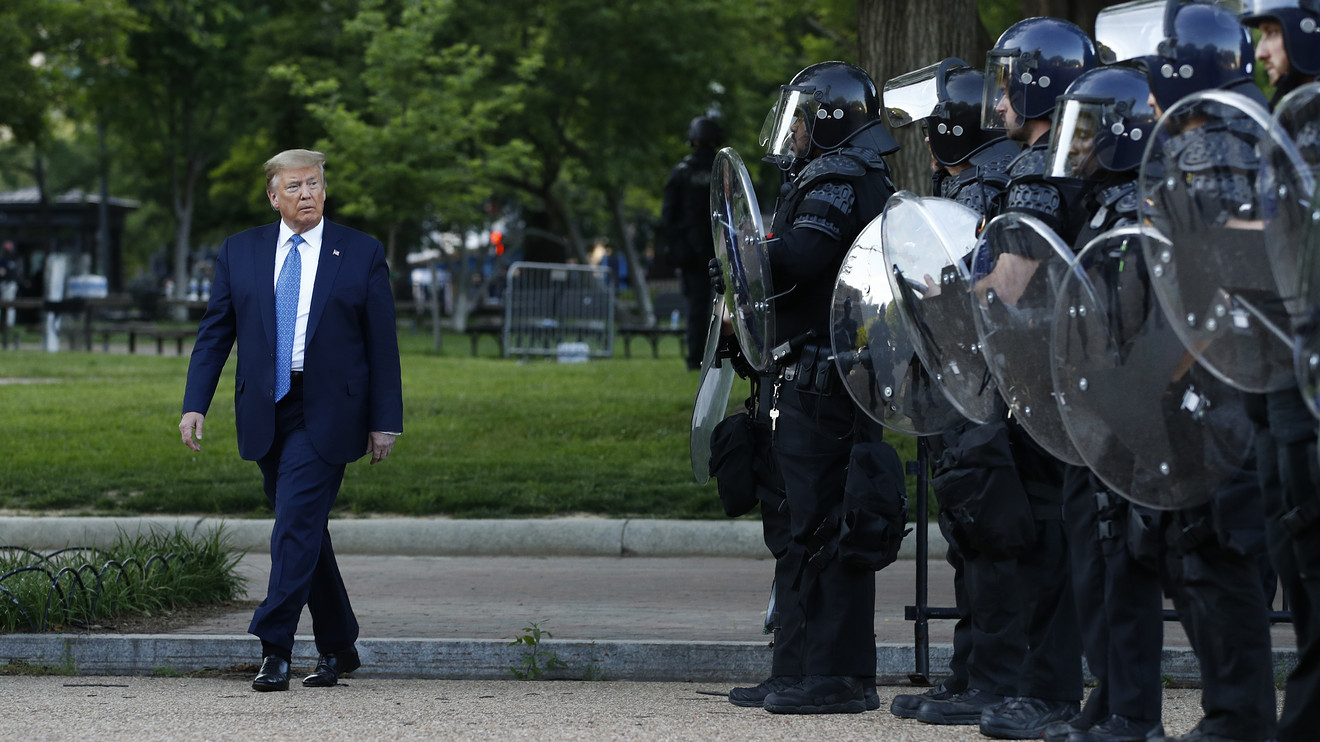 Trump says 75-year-old Buffalo protester Martin Gugino, who was pushed around by police, may have been part of a ‘set-up’

President Donald Trump tweeted Tuesday an assertion that a 75-year-old Buffalo man pushed to the ground by police last week may have been an “ANTIFA provocateur” who was part of a “stunt”.

Trump may have gotten the theory from One America News, a conservative outlet he promoted on his Twitter feed. Perhaps citing an OAN report, Trump said the man, Martin Gugino, was trying to scan police equipment and cut communications.

“I looked, he fell harder than he was pushed. Aimed at the scanner. Maybe an establishment? Trump wrote.

Gugino’s lawyer said on Monday that he is still hospitalized and in “serious but stable condition”, adding on Tuesday that he was “puzzled” as to why the president “would make such dark, dangerous and false accusations”:

Two police officers were charged with assault and pleaded not guilty after a video showed them pushing aside Gugino, a longtime peace activist and reported member of the Catholic worker movement, last Thursday evening. The video shows Gugino bleeding from his head after being thrown to the ground.

Lily:Buffalo prosecutors said two police officers were charged with a stampede incident that left a 75-year-old activist in critical condition.

Protesters have protested in cities across the United States following the death of George Floyd, a black man who died in Minneapolis on May 25 after a white policeman stuck his knee in his neck even after he stopped responding.

Last week, Attorney General William Barr said the federal government had evidence that the antifa movement – short for anti-fascist – had “hijacked” the protests. While Trump has said the United States will designate anti-fascism activists as a terrorist organization, its legal authority to do so is unclear.

See:Trump calls governors “weak” during protests because the designation of antifa as a terrorist organization is contested.

On Capitol Hill, Trump’s tweet met with a mixture of resignation and disgust from Republican senators speaking to reporters.

“I saw the tweet. It was a shocking thing to say and I will not honor it with any further comments, ”said Senator Mitt Romney of Utah. Romney has often publicly disagreed with Trump, although he continued to vote for Trump’s judicial candidates, who are a priority in the White House.

Alaska’s Senator Lisa Murkowksi, who Trump has said he plans to campaign against, said “Oh Lord” when shown the tweet. Asked to comment, Murkowski said: “Why would you want to fan the flames? That’s all I’m going to say. Thank you.”

Indiana Sen. Mike Braun was more discreet in his reaction. “I don’t think that should be surprising in general because he tweets a lot. So I don’t know how important this tweet will be, but it doesn’t shock me that they come out often, ”he said.

Jonathan Nicholson contributed to this story.

Sign up for Trump Today and other MarketWatch newsletters.

FundMore and VeriFast Partner to Upgrade Digital Verification for Lenders