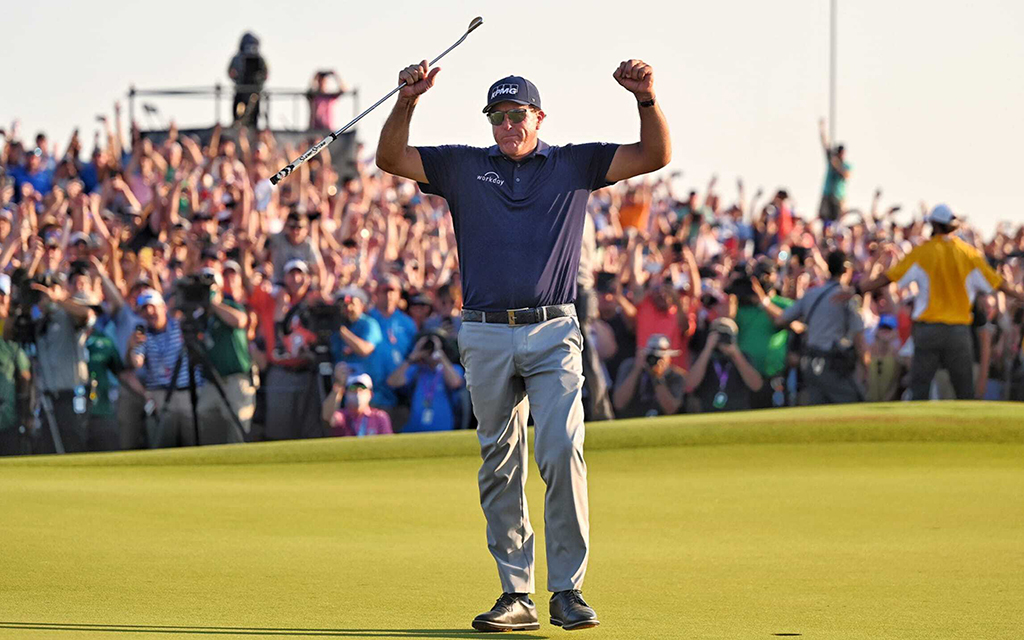 Is Mickelson’s 50-year-old victory a sign of things to come?

Phil Mickelson not only won the PGA Championship, he did so as the oldest player to win a major, leaving some wondering if older athletes will experience more athletic success in the future. (Photo courtesy of PGA.com)

After the tournament, Tim attributed Phil’s success to his passion for the sport. “He loves golf. I mean, when he’s home he still plays almost every day, sometimes 36 (holes). (Photo courtesy of Mary Mickelson)

The legendary southpaw and former Arizona State student became the oldest golfer to win a major at age 50, winning the PGA Championship on Sunday.

It was Mickelson’s sixth major victory and the first since 2013. With it, not only did he become the oldest golfer to ever win a major, but he also joined a prestigious roster of golfers to win a major in three different decades.

And that raised an interesting question: Is Mickelson’s success at 50 a sign of things to come for other athletes?

“There are many benefits that accumulate over time in sport,” said Jeff Bercovici, author of “Play On: The New Science of Elite Performance at Any Age”. “You get a lot of knowledge, a lot of skills, a lot of experience, maturity and emotional control, all of those things that are good for any athlete. The point is, you also have a big downside, which is that your body is aging. You slow down, you hurt yourself more easily. Historically, the disadvantages have accumulated faster than the advantages.

“What we’ve seen, especially over the past 20 years, is that the science of athletic training in particular, but also medicine, surgery, nutrition, recovery, has allowed athletes to slow down. the rate at which their bodies are aging to the point that now we see what happens when the benefits are expressed more fully than we have ever been able to see before. “

Mickelson knows all about the importance of nutrition and training as he has changed his physique over the past few years through a fasting diet to improve his game.

“If you can have the body of a younger person but the spirit of an older person, you dominate your sport,” Bercovici said.

Mickelson has years of experience and wisdom under his belt, but has managed to keep his young energy alive throughout his career, said his brother and caddy Tim Mickelson.

“He’s the same guy he was when he went to college when it comes to the fun of golfing and competing,” said Tim Mickelson. “He loves competition.”

After the third round, former ASU golfer Jon Rahm was delighted with Mickelson’s career.

“You could argue that five might not be enough for the quality of his career, and I really hope he gets his record. I hope he wins his victory, ”Rahm said at a press conference. “I hope he leaves this imprint on history which will not be beaten in a very long time.”

The last person to hold the record for the oldest golfer to win a major was Julius Boros, who was 48 when he won the PGA Championship in 1968.

Steve Loy, a former ASU golf coach who is Mickelson’s agent, was impressed with his performance and texted his former player the morning before the final round.

Sunday’s victory was not without competition as Mickelson had to hold back Brooks Koepka and Louis Oosthuizen who were chasing him all day. As Mickelson and Koepka approached the 18th hole, Mickelson led by two strokes.

Then, as fans surrounded him, he pulled the par to solidify the story.